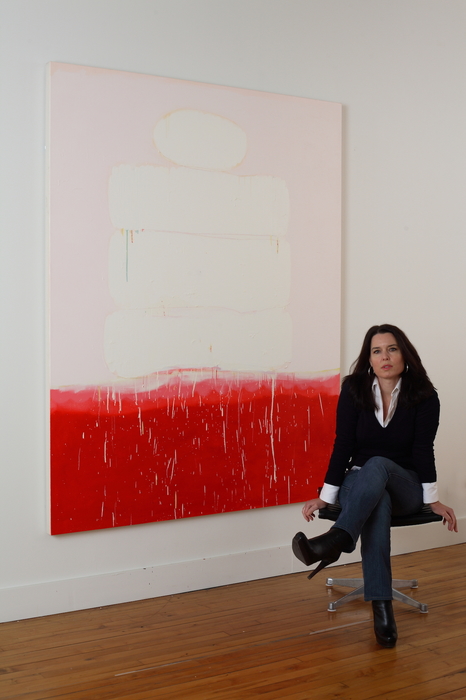 Critics have called Anya Spielman a “painter’s painter,” “a superb colorist,” and “a macho painter.”

Ted Mooney, Senior Editor of Art in America says of Spielman’s work: "Anya Spielman's mastery of her invariably appealing palette can be deceptive: she knows the depths of human motive and does not hesitate to take the viewer to places both more ambiguous and darker than may at first seem evident. What's more, it may take you some time to figure out how you got there, let alone how to get back. But that, after all, is what serious painting is all about."

As Mooney states, there exists a complex duality to Spielman’s work: it is both intensely physical with elements of violence while hyperconscious of the beauty and evanescence of life. The result is work that is expressionistic and yet operates within a framework of restraint.  The saturated color of the canvases and works on paper are juicy and sensual, yet there is something disturbing in their beauty.  Spielman’s surfaces are extraordinary, gorgeously layered, yet upon close study, rough nail marks scar the paint and deconstruct the work. Above all, there is a strong sense of mystery in Spielman’s work – she reminds viewers who are brave enough to keep looking of the tenuous balance between knowing and not knowing.

Spielman’s most recent work continues to explore the constellation of these binary forces and forms, presenting reoccurring two fold images:  pathology beside beauty; ejaculation beside petals; gunshot beside blossom.  The work “Disease” reflects two vague head-like silhouettes in the upper center of painting – a red cluster hovers above (conjuring both blossoms and clotted blood), while a black band and dark streaks reminiscent of arteries intimate something more gruesome.  “Lust,” can be seen as images of engorged blossoms or breasts bleeding milk.  “Crush,” plays with the tension between light and color, weightlessness and gravity.  In “Powder,” a figure bleeds “tears” of yellow, green and pale blue – a scalloped bottom edge tries to anchor the confectionary white tower which is slowly seeping.  Each piece draws the viewer in with dueling fragility and brute strength.

Similarly, much of the work is sexual– some of it veiled, some explicit, but, as with all of Spielman’s work, her paintings bear a dual meaning.  In the painting “Sugar Bush,” for example, the shower of white smudges can look like falling petals, a first snowfall, or ejaculation.  And the main object in “Things to Suck,” resembles a lollipop, however, suspended testicles loom overhead.  The juxtaposition hints at two separate realms of experience, while also displaying Spielman’s bold and mischievous sense of humor.

Spielman graduated from the University of California at Davis in 1989 with a major in Art Studio and a minor in Anthropology.  She was a student of Wayne Thiebaud, and has exhibited extensively both nationally and internationally.  Most recently, in 2013, she was nominated for the Joan Mitchell Foundation Painters and Sculptors Grant Award.  Also, in 2013, her large-scale painting, “Weightless” was purchased by the U.S. Department of State’s Art in Embassies Program (AIE) for their permanent collection in the U.S. Embassy in Monterrey, Mexico.  In 2010, she was included in the New Museum’s Bowery Artists Tribute in New York City.  In 2007, she was awarded the American Artist Abroad Program by the AIE U.S. Department of State, to serve as an Art-Ambassador in Uruguay, teaching and lecturing.  Spielman has shown at: Aqua Art Miami, Miami, FL; Kustera Projects Red Hook, Brooklyn, NY; Michael Rosenthal Contemporary Art, San Francisco, CA; The Window Project, PDX Contemporary Gallery, Portland, OR; Art Fair 21, Cologne, Germany; White Box Gallery, New York, NY; Deitch Projects, New York, NY; Terrain Gallery, San Francisco, CA; Artists Space, New York, NY, and The Palm Springs Desert Museum, Palm Springs, CA.  Her paintings have also appeared on the reality shows “The Queer Eye for the Straight Guy” and “The Bachelorette,” and in several motion pictures.  Her work is in numerous private and public collections.